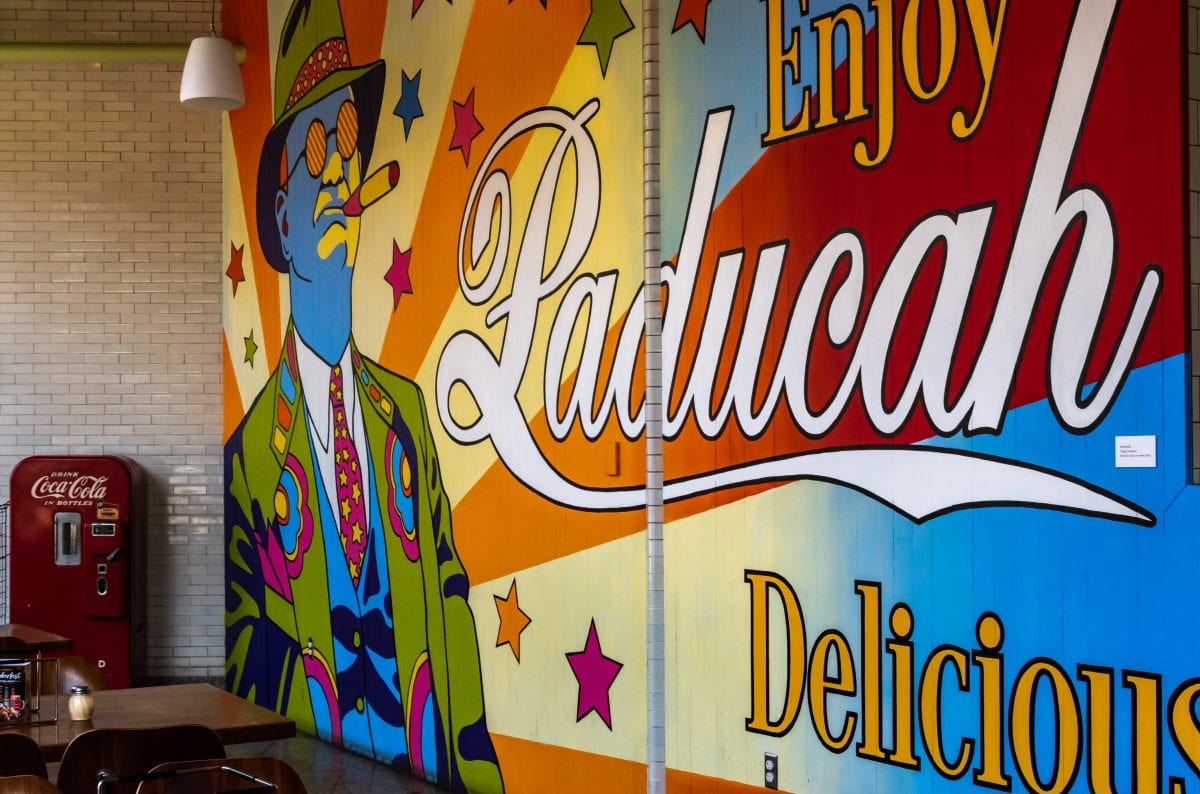 What do you do with an old, vacant and run down yet historic Coca Cola bottling plant? You turn it into a destination, with good food and craft beer and make it one of the best restaurants in Paducah KY.

The Coca Cola bottling plant was founded in 1939 and was designed by Lester Daley of Metropolis IL in a unique art deco style. It remained in operation until 2005 and then remained vacant and fell into disrepair for over ten years until Ed and Megan Musselman purchased the plant and restored it. The couple had the original windows resealed, revived the 9,000 square feet of terrazzo tile, restored the neon dome and brought the building back to its beautiful 1939 Art Deco glory. The building was refitted for spaces for small businesses like an ice cream parlor, a coffee shop, a yoga studio and others.

Mellow Mushroom – One of the best restaurants in Paducah KY

The anchor business for the revitalized space is a Mellow Mushroom restaurant specializing in gourmet pizza and a huge selection of craft beers. Mellow restaurants are known for incorporating local art into their décor, and this Paducah franchise is no exception with over 22 local artists leaving their creative mark on the walls. Not surprising for a town that has been named one of the UNESCO cities of creativity.

The restaurant space is dominated by a large and colorful mural of Luther Carson, the founder of the original Coca Cola bottling plant. The walls are decorated with distinctive art shaped like puzzle pieces. And sculptures made from recycled metal objects are scattered throughout. 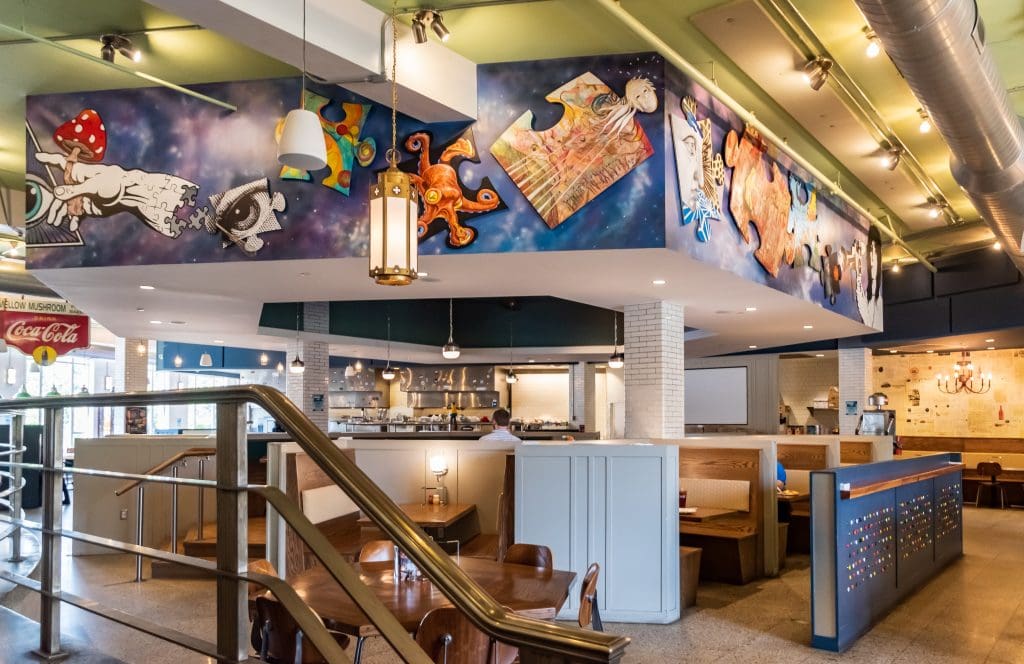 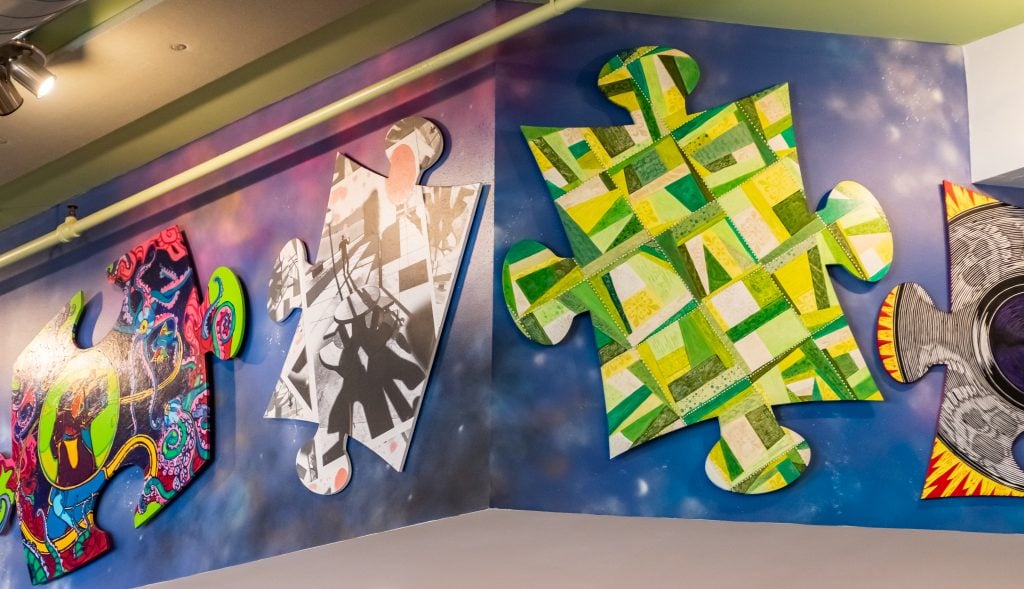 When I travel, I am always on the lookout for unique places to eat. Unique can refer to the food or the location. In this case, Mellow Mushroom provided both.

During both my recent visits to Paducah I chose to eat here because of the fun ambiance and the good food. My first trip to the area was for the spring AQS Paducah Quilt Week where I had a quilt on display. My second time was in September as I was passing through on my way to explore the Shawnee National Forest just across the river in Illinois.

I loved the Holy Shitake pizza loaded with a variety of mushrooms, caramelized onions and lots of cheese. On the second visit I tried the Thy Dye Pie which was equally delicious with its curry chicken and Thai chili sauce.

The old Coca Cola plant was large and the building space has been developed to house a number of different businesses, both large and small. On the other side of the building is Dry Ground Brewing Company, Paducah’s first craft brewery.  The brewery takes its name from the story of how the Coca Cola bottling plant was established at this particular location.

In 1937 the first Coca Cola bottling plant along the river was submerged during the great 1937 Ohio River flood. The plant’s owner, Luther Carson, escaped on an empty syrup barrel as he floated out of the second story window to a rescue boat. He vowed to build a new plant wherever he reached “dry ground”.

Their beers have funky names and fun descriptions.  When I was there, the Preacher Pils, a pilsner, smelled like fresh poured Kentucky lemonade with hints of fresh cut cantaloupe.

To enjoy all their beers, you have to go onsite and get them fresh on tap.

As a UNESCO Creativity city, Paducah has developed into a community that values and promotes the arts in many forms. It’s good to see that such a historic building was restored and its unique Art Deco details kept intact, while at the same time making it a modern, fun, and tasty destination.

If you are passing through Paducah, make sure to put this building and its businesses on your to-visit list. 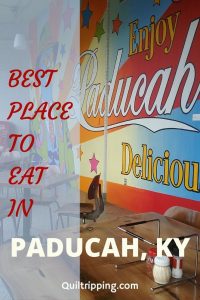 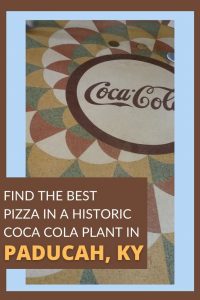 Unless otherwise noted, all travel is at my own expense. All content is my personal opinion. All information is accurate to the best of my ability at time of writing. Content and photos may not be used without my written permission.

I believe that life is a patchwork of experiences. I am a retired PhD chemist with a lifelong passion for travel, photography and quilting. I love learning about and sharing the unique cultural and scenic aspects of the places I visit. I am always on the lookout for unique experiences and like to focus my traveling lens on history, art, architecture, nature and soft adventures with a touch of luxury. I also love the challenge of taking beautiful photos that capture the essence of the location I am visiting. And I like to make quilts inspired by my travels.

My Experiences. My Voice. Your Inspiration. 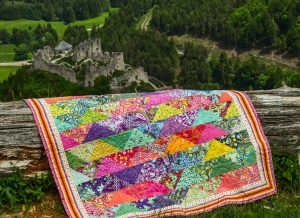 Proud Winner of 18 NATJA awards for writing and photography 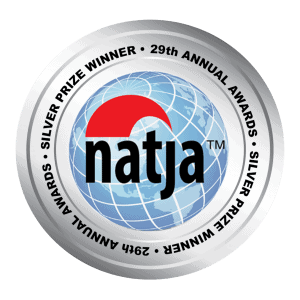 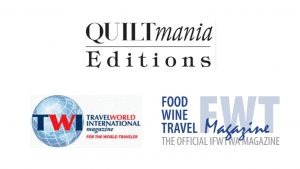